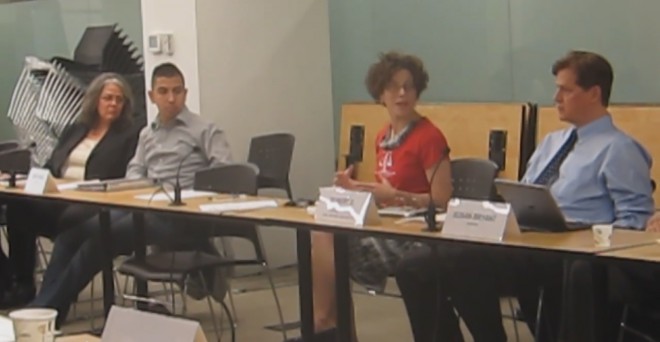 The Legal Services Staff Association made a presentation to the Legal Services NYC Board at their October 14, 2014 meeting. Union President Amy Hammersmith addressed contract negotiations, the need for a significant raise to pace with the cost of living, and the union’s recent call for a union-management discussion about hiring.

The union and LSNYC are in the midst of contract negotiations for the next term of a contract that expired July 31, 2014. The union president acknowledged with appreciation the efforts that have been made by management to change the tone of bargaining, as compared to management’s aggressive and adversarial stance in 2013 which sent the union out on strike for six weeks. Hammersmith also noted that Executive Director Raun Rasmussen is not at the bargaining table, as per tradition, and expressed hope that his absence wouldn’t slow bargaining down.

We are looking for something that is meaningful, sustainable, and livable, and that is comparable to what managers got.”

Hammersmith then turned to salaries, stating “The big issue on the table is inflation… Our salaries have not kept pace with the rise in the cost of living. At the time of the last contract negotiation, even rent-stabilized rent had gone up by 7.25 percent.”

New payments for health insurance have eaten away at salary increases. Some staff have actually seen their salaries go down, because their new health insurance contributions were larger than their step increases. Furthermore, the large portion of our long-term staff who are “off the steps” — “this includes people from process servers all the way up to attorneys — got a one-time payment that means they are getting paid in real dollars actually less than they were getting paid in the last contact.”

The union has been paying attention to the funding LSNYC is receiving, and to the raises given to managers. “LSNYC has lots of good funding news, and managers recently got raises between 5% and 11% – we are looking for something that is meaningful, sustainable, and livable, and that is comparable to what managers got.”

Hammersmith then rebutted LSNYC Executive Director Raun Rasmussen’s characterization that “we are requesting a hiring freeze.” Hammersmith stated “That is not what we are looking for. What we want is meaningful input into the discussion about the composition and scope of hiring. We all recognize that some of the grants require deliverables that can only be met with more staff. What we want is to see that the hiring is strategic and thoughtful. To do that, the staff on the ground who are doing the work need to be included in that discussion.”

Hammersmith offered several examples that have been observed around the city: “A lot of the postings and hiring have been for attorneys. Granted – many of the deliverables require a certain number of full rep cases to be done. But in many of our offices, there is already a severe shortage of support staff, and case handlers are doing work that support staff would traditionally do, which means they have less time to handle cases.”

“What we are interested in is having a dialogue such as: perhaps instead of hiring four attorneys you hire three attorneys and an executive secretary, or you hire a receptionist for an office that doesn’t have a full time receptionist so the paralegals don’t have to cover the front desk, and can do the work that they are best prepared and trained to do.”

At the time of the October Board meeting, LSNYC had still not received word from LSC regarding carry-over funding. Hammersmith noted that this and other questions that were still in the air should have been answered “before we actually went ahead and made offers to people and then committed to keeping them.”