Guess What! Many Public Interest Lawyers are in Unions! 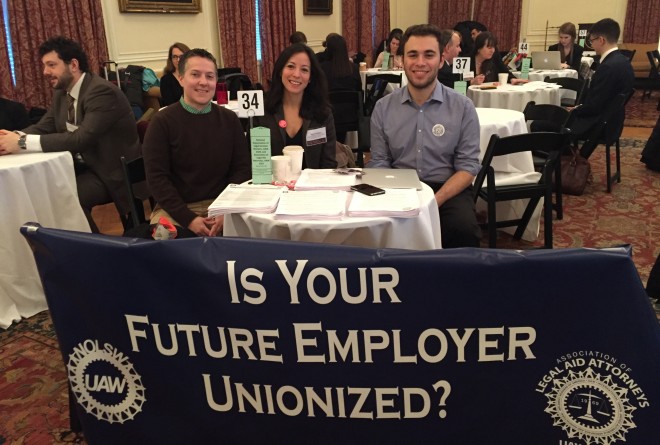 What Does It Mean to Belong to a Union?

Without a union, workers have little power over their pay and working conditions. Employers do not have to bargain with individual workers and can change pay and other working terms or fire workers at will.

When workers join together to collectively bargain they empower themselves and level the playing field with their employer. All workers have the legal and human right to join a union. With a union, employees have a legal right to bargain with their employer and to have the resulting agreement placed in an enforceable contract.

Who Can Be in a Union?

In a legal services office, lawyers, social workers, administrative staff, and organizers are eligible to be in a union all together: a “wall-to-wall” union. In some legal services offices, only some of the groups of staff have elected to unionize: for example, only the staff attorneys. Managers, supervisors, and confidential employees (people especially close to management) cannot be part of a union.

Staff Attorneys Have the Legal Right To:

It is Against the Law for an Employer To:

What are the Benefits of Being Unionized?

No union can guarantee what will be in the contract—that is the product of negotiation with each employer. But, on average, unionized workers enjoy better wages and benefits than non-unionized workers. They also typically have protections against unjust termination, a voice in workplace decisions, procedures for resolving workplace disputes, and the security of a written contract— which means that what they win at the table cannot be taken back on the whim of their employer.

Workers who unionize help to raise the workplace standards for all employees in their industry and community and become a part of a local, national and international network of solidarity, through which workers support one another in their individual struggles, and pool their numbers and resources to bring about social, economic and political changes that benefit all working people.

Which Legal Organizations are Unionized?

Click here to download a list of US-based legal organizations that have unionized staff members. We’ve tried to make it as complete as possible, but if we’re missing an organization, please let us know by emailing lssa at lssa2320 dot org.