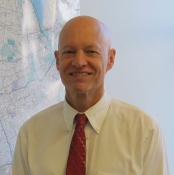 The union’s Executive Committee has written to the Board of Legal Services NYC to convey the union’s disappointment with LSNYC’s upper level management for needlessly forcing the union out on strike in 2013, and then losing $1.27 million dollars in federal Legal Services Corporation funding as a result.

The text of the letter states:

After several weeks of reflection, we, the Executive Committee of LSSA 2320, remain deeply disturbed that $1.27 million dollars of Legal Services Corporation (LSC) funding has been squandered, and we continue to be extremely frustrated that the organization’s leadership team allowed this to happen. 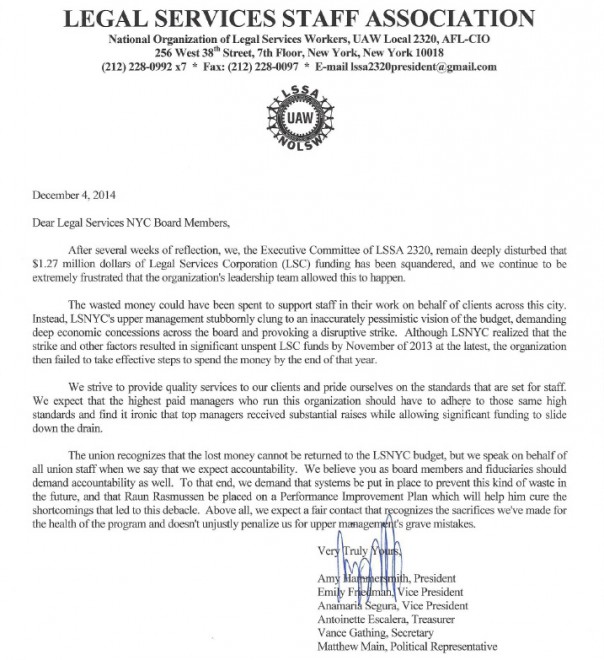 The wasted money could have been spent to support staff in their work on behalf of clients across this city. Instead, LSNYC’s upper management stubbornly clung to an inaccurately pessimistic vision of the budget, demanding deep economic concessions across the board and provoking a disruptive strike. Although LSNYC realized that the strike and other factors resulted in significant unspent LSC funds by November of 2013 at the latest, the organization then failed to take effective steps to spend the money by the end of that year.

We strive to provide quality services to our clients and pride ourselves on the standards that are set for staff. We expect that the highest paid managers who run this organization should have to adhere to those same high standards and find it ironic that top managers received substantial raises while allowing significant funding to slide down the drain.

The union recognizes that the lost money cannot be returned to the LSNYC budget, but we speak on behalf of all union staff when we say that we expect accountability. We believe you as board members and fiduciaries should demand accountability as well. To that end, we demand that systems be put in place to prevent this kind of waste in the future, and that Raun Rasmussen be placed on a Performance Improvement Plan which will help him cure the shortcomings that led to this debacle. Above all, we expect a fair contact that recognizes the sacrifices we’ve made for the health of the program and doesn’t unjustly penalize us for upper management’s grave mistakes.