The Legal Services Staff Association (“LSSA”) shares the disappointment and outrage felt by the family of Eric Garner, other advocates and organizations, and communities across the nation regarding the failure of the District Attorney in Staten Island to obtain an indictment for the killing of Eric Garner by officers of the NYPD. The lack of accountability for this specific instance of police brutality is truly a disturbing miscarriage of justice.  However, as advocates who serve poor communities of color around this City, we recognize that the case involving Eric Garner and officer Daniel Pantaleo is but one example of systemic and structural biases that pervade the entire judicial process. 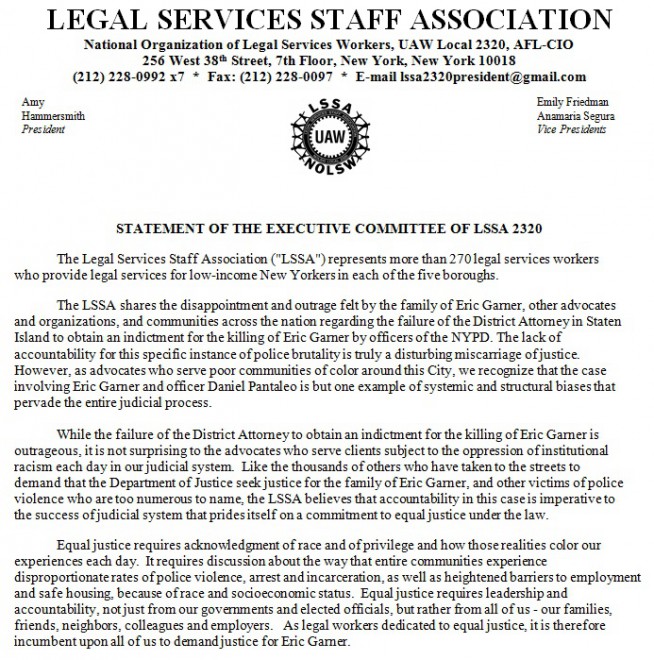 While the failure of the District Attorney to obtain an indictment for the killing of Eric Garner is outrageous, it is not surprising to the advocates who serve clients subject to the oppression of institutional racism each day in our judicial system.  Like the thousands of others who have taken to the streets to demand that the Department of Justice seek justice for the family of Eric Garner, and other victims of police violence who are too numerous to name, the LSSA believes that accountability in this case is imperative to the success of judicial system that prides itself on a commitment to equal justice under the law.

Equal justice requires acknowledgment of race and of privilege and how those realities color our experiences each day.  It requires discussion about the way that entire communities experience disproportionate rates of police violence, arrest and incarceration, as well as heightened barriers to employment and safe housing, because of race and socioeconomic status.  Equal justice requires leadership and accountability, not just from our governments and elected officials, but rather from all of us – our families, friends, neighbors, colleagues and employers.   As legal workers dedicated to equal justice, it is therefore incumbent upon all of us to demand justice for Eric Garner.

The Legal Services Staff Association represents more than 270 legal services workers who provide legal services for low-income New Yorkers in each of the five boroughs.