At the beginning of June, LSNYC and MFY learned that the proposed City Council budget reflected a severe cut to significant immigration funding. This IOI (Immigrant Opportunities Initiatives) funding was money that both legal services providers had been receiving for a number of years and had come to count on. LSNYC was poised to lose $425,000 citywide, and MFY $125,000.

LSNYC reached out to the union for assistance. In order to save this funding for client services, and to fight against potential layoffs, we marshaled our forces very quickly. In a matter of hours, as the City Hall budget process wend toward a close, we called many City Councilmembers, and we spearheaded and sent a letter (attached) from Region 9A of the UAW which calls on the City Council to restore the funding that had been cut from unionized legal services programs.

The UAW’s efforts to help save over a half million dollars in funding for LSNYC and MFY to provide immigration services were successful, and funding was fully restored in the City Council budget to both organizations: $425K to LSNYC and $126K to MFY. 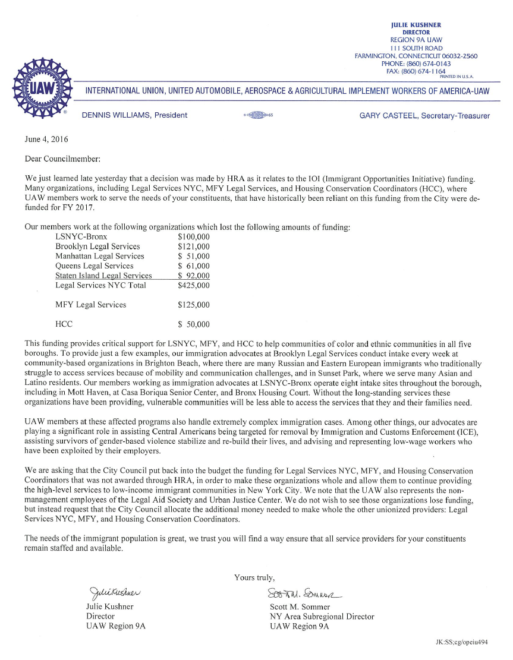