Last week, we learned that the Immigrant Justice Corps fellowship program planned to radically change their fellowship program. Instead of the fellows being on staff at LSNYC, IJC wanted to make them staff of the IJC program.

That would have meant that instead of being paid a union salary and benefits, with the rights and protections that our contract gives us, the fellows would have been paid a much lower salary, worse benefits, and would not have had the protection of being union members.
We mobilized quickly and informed our existing fellows and the other unions who have IJC fellows about IJC’s plan. Together with the Legal Aid attorneys union, the Urban Justice Center union, the NOLSW, and Region 9A of the UAW, we sent a letter to IJC, their board, and the executive directors of LSNYC, Legal Aid, and UJC expressing our vehement opposition to this plan.

IJC immediately backed down and agreed that the present and future fellows would be on staff at LSNYC and receive the appropriate union salary and benefits. LSNYC executive director Raun Rasmussen expressed gratitude to our union for our advocacy, which helped change IJC’s position. 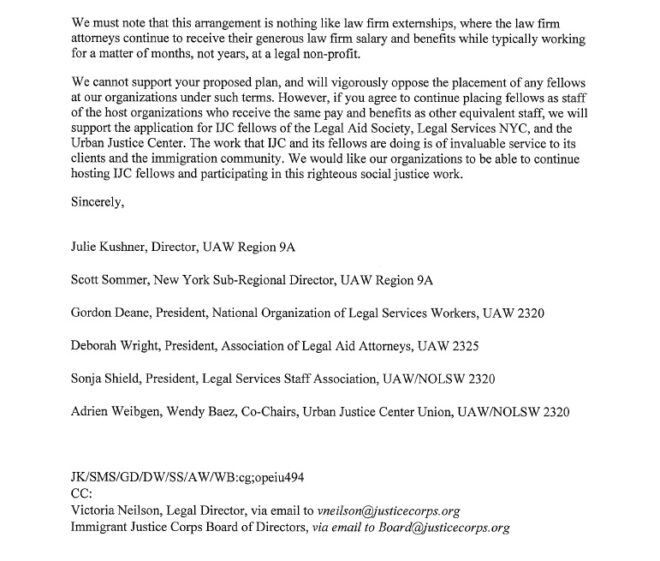