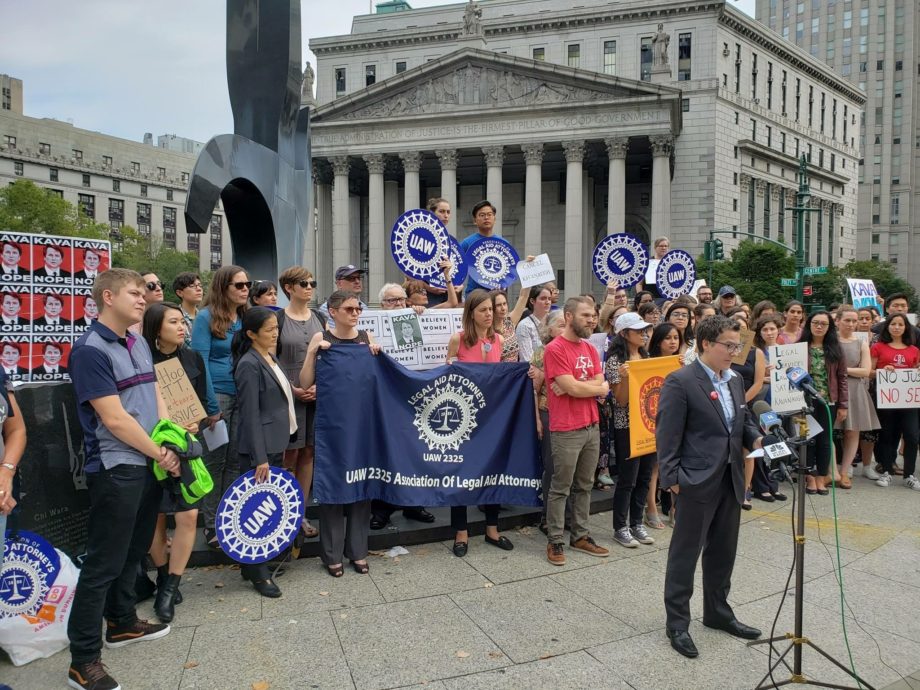 The Legal Services Staff Association (LSSA), NOLSW/UAW 2320, along with the Association of Legal Aid Attorneys (ALAA), UAW 2325, held simultaneous rallies in all five New York City boroughs on October 4, 2018, to protest the nomination of Brett Kavanaugh to the US Supreme Court.

LSSA and ALAA members represent low-income New Yorkers in civil and criminal cases. Every day, we fight tooth and nail to protect our clients’ basic rights, and we see just how fragile those rights are. If he is appointed to the Supreme Court, Judge Kavanaugh will further erode the rights of women, people of color, and other oppressed groups. At 1pm on October 4th, LSSA and ALAA members converged at one location in each borough and held a one-hour rally in order to send a clear message that behavior like Kavanaugh’s is unacceptable, and that he should not be appointed to the US Supreme Court.

Before last week, Brett Kavanaugh’s appointment to the highest court in the US seemed controversial but inevitable. Thanks to the incredible bravery of Dr. Christine Blasey Ford, this is no longer the case. Last Thursday, Dr. Ford stood before the US Senate and described her sexual assault at the hands of Judge Kavanaugh. Her testimony was heartfelt, moving, and obviously credible. Responding to that testimony, Judge Kavanaugh delivered a petulant, arrogant, and disrespectful speech filled with threats and lies. His temperament and partisanship demonstrate that he is not appropriate to sit on the Supreme Court. Meanwhile, others assaulted by Judge Kavanaugh continue to come forward. 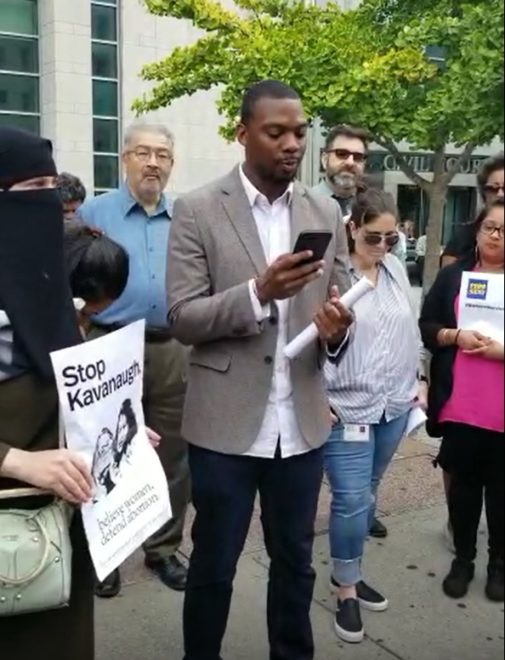 “As a Federal Judge, Kavanaugh has demonstrated his disdain for the environment, the rights of women, the rights of people of color, and other oppressed people,” stated LSSA President Sonja Shield. “Even before Dr. Ford came forward, it was clear that Kavanaugh was an ideologue perfectly tailored to carry out President Donald Trump’s agenda. The Senate hearing last week dramatically demonstrated the damage these beliefs will cause.” Speaking to those gathered at Foley Square, Shield continued “We are rallying here today because Judge Kavanaugh would be a disaster for women, for people of color — for all working people. In this past week, he has shown his open, partisan rage at liberals, at anyone who seeks to question or challenge him. How could anyone hope for a fair trial in front of him?”

“The members of ALAA and LSSA stand in solidarity with all victims of sexual violence, including Dr. Ford and any other women who Judge Kavanaugh has assaulted over the years,” stated ALAA President Deborah Wright. “We stand against Judge Kavanaugh’s heinous acts and also against his jurisprudence, which demonstrates a consistent disregard for the rights and humanity of women, workers, people of color, and the environment.”

“People who are already vulnerable will face increased threat, and we could not, as people working within the legal system, stand idly by while his nomination and his appointment was rushed through,” said MFJ staff attorney and LSSA union member Brian Sullivan to WCBS Newsradio 880. Click here to listen to their report. 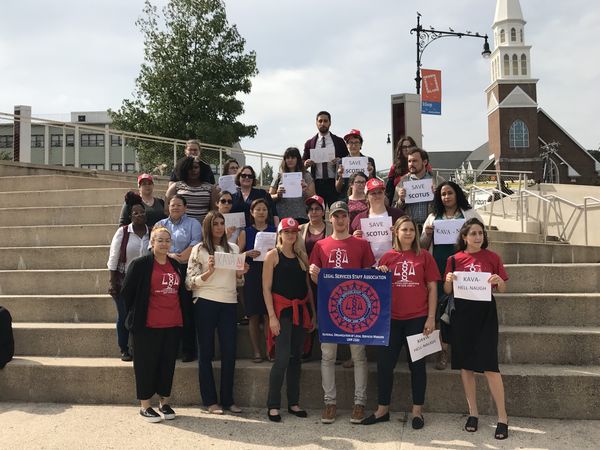 In Manhattan, “Demonstrators waved home-made posters scrawled with ‘Defend Women Stop Kavanaugh,’ ‘No Justice No Seat’ and ‘Kava-HELLnah!’ Cries of ‘Hey hey, ho ho, Kavanaugh has got to go’ and ‘Listen to survivors not sniveling liars’ drowned out the roar of traffic on Center and Lafayette streets,” described the Tribeca Patch. On Staten Island, SILive described “About 20 lawyers, paralegals and support staff marched along the sidewalk near the courthouse while holding signs and chanting anti-Kavanaugh slogans.”

As lawyers, paralegals, social workers, administrative staff and legal services workers, and as union members, survivors of sexual violence, women, and allies, we will not stand idly by while this man is handed incredible power over our lives and the lives of our clients. We thank all legal services workers and other New Yorkers who stood with us to oppose Brett Kavanaugh’s appointment to the nation’s highest Court.