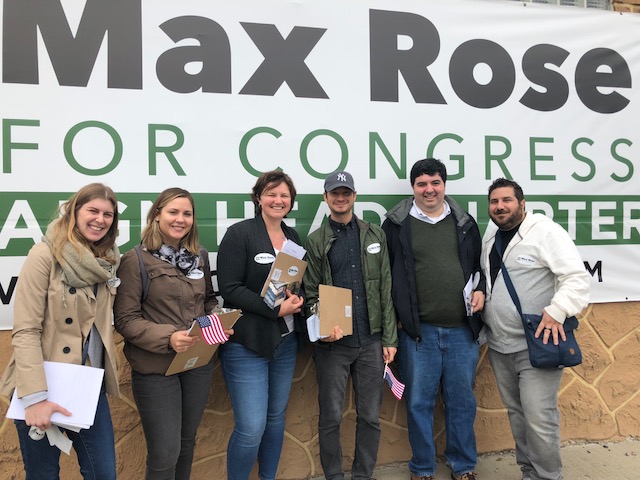 On November 6th, 2018, the Democrats flipped the US House, restoring some semblance of checks and balances to our country.

Here in New York State, three formerly Republican-held House seats flipped blue – Max Rose in New York City, and Antonio Delgado and Anthony Brindisi upstate. All three of those districts had gone for Trump in 2016. The UAW endorsed and some of our members worked to get out the vote for Rose and Delgado, contributing to their victory. With strong support from the UAW, Liuba Grechen Shirley gave Long Island Republican Peter King the most serious run for his money that he’s seen in decades, winning 47% of the vote to his 53%.

We also have a lot to celebrate on the state level. Democrats seized resounding control of the New York Senate, confirming September’s defeat of the Republican-aligned Independent Democratic Conference (IDC) and ending Republican rule in Albany. In a squeaker, Southern Brooklyn-based Andrew Gounardes defeated Republican and Nazi-sympathizer Marty Golden. As part of the UAW, we endorsed and worked to help elect many of those newly elected candidates, including Zellnor Myrie, Andrew Gounardes, Alessandra Biaggi, Jessica Ramos, Catalina Cruz, and more. Many of our members logged our votes on the Working Families Party (WFP) line, signaling to Cuomo the large number of progressive voters in New York and helping the WFP keep its ballot line.

New York now has the opportunity to be the progressive state its residents deserve. Among other things, we may finally be able to expand voting access, modernize abortion laws, overhaul rent regulation law, and address campaign finance reform. We as New York workers and residents will need to stay alert and keep fighting to make sure our newly-elected representatives remain accountable to us while in office. A record-breaking number of women of color, white women, and LGBTQ people were elected to public office across the country. In Congress, Sharice Davids and Deb Hassland are the first Native American women elected, Alexandria Ocasio-Cortez (at 29) is the youngest woman ever elected, and Ilhan Omar in Minnesota and Rashida Tlaib in Michigan became the first Muslim women to be elected. Ayanna Pressley and Jahana Hayes will be the first black women elected to Congress in Massachusetts and Connecticut, respectively. Colorado elected an out gay man, Jared Polis, as governor. Lucy McBath, whose son was murdered by a white man who objected to his music, was elected to Newt Gingrich’s former House seat. Tish James is the first woman and first African-American elected as New York Attorney General. And former UAW Region 9A Director Julie Kushner won her race for Connecticut state senate.

Some major victories of note nationally:

Our defeats last night were no less devastating for being expected. Republicans held on to the US Senate and even gained seats, pushing out Claire McCaskill and Heidi Heitkamp, both of whom voted against Brett Kavanaugh’s appointment to the Supreme Court. Beto O’Rourke in Texas and Andrew Gillum in Florida appear to have narrowly lost their races. Across the country, the determination of white supremacy and white supremacists to protect their power was in full evidence. Stacey Abrams, who continues to fight for the Georgia governor’s house, faced an astounding level of voter suppression by her opponent who is simultaneously administering the election.

Even within our losses, there were notable victories. Though Beto didn’t win, he gave Cruz a serious run for his money and also created a wave of down-ballot victories, helping to flip several Texas state-level House and Senate seats for Democrats. Beto, Gillum, and Stacey Abrams energized Democrats in purple states, leading to record turnout and wins in other races on their tickets. As of this writing Abrams appears to be within the margin needed for a run-off election, holding out hope that she might yet win.

The many voters who refused to be dissuaded by dirty tricks to suppress and discourage their vote, and who cast their ballot despite long lines and defective machines, intentionally inconvenient polling locations, and districts drawn to minimize the effect of their vote, are to be applauded.

Voting is not the solution to all that ails us, but it helps determine the battlefield on which we fight. On Tuesday we were able to reshape our battlefield and we fight in more favorable weather today.

A few thank yous are in order: first to our members who volunteered to coordinate information about voter registration and get-out-the-vote efforts for our union, and to our member who slogged through hours of data entry to allow us to send personalized emails to members in districts with competitive races. Thank you to all of our union members who door-knocked, phone-banked, or texted voters with our union or on your own. Finally, thanks for everyone who voted in the primary and again in the midterm, perhaps registering for the first time, perhaps bringing your friends and family with you.