Skip to content
At the next DA meeting on November 6, 2013, delegates will take up the question of amending the bylaws to provide for more proportional representation. There are two proposals that will be considered and voted on. 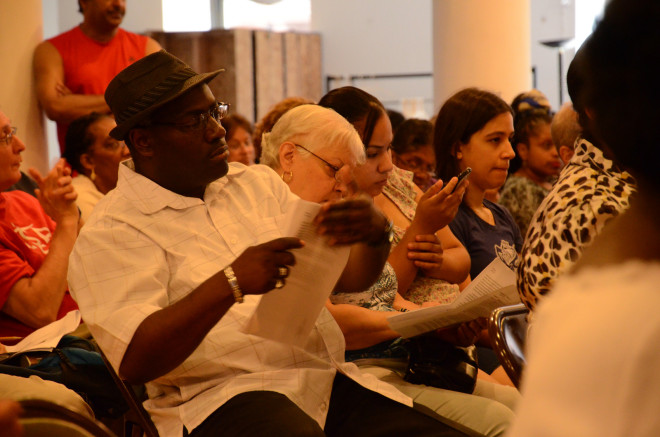 1) The first proposal is put forward collectively by members of the Delegates Assembly:

Section 1. The Delegate Assembly shall be the governing body of the organization. The Assembly shall consist of the officers of the organization and two the representatives from each office program, which shall include at least one legal worker and one attorney. The members of each program shall be the shop.  The shop shall elect attorney and legal worker delegates with parity except that, upon good cause shown concerning a skew in the ratio of attorneys or legal workers in a program, the DA may permit an attorney delegate position to be occupied by a legal worker or vice versa. The shop shall also elect at least one attorney alternate-delegate and at least one legal worker alternate delegate who shall not normally vote but who, as needed, may vote in place of the regular delegate. The shop may also elect co-alternate delegates as needed in order to respond to needs within the shop. Delegates shall be elected by a majority vote of members of LSSA in each office program and shall serve a term of one year. The names of the people so elected shall be submitted to the President within ten (10) days of the annual meeting of LSSA and their term shall begin on the first day of the month following the annual meeting. and within ten (10) days of any vote by the members of the program to replace a delegate or fill a vacancy.

(New Section ) Section 3. Members At Large.
The DA may elect up to two additional voting members of the DA from the membership for the purpose of making the DA more inclusive of the whole of LSSA. This may include legal workers or persons of color if underrepresented, or some other portion of the membership which the DA finds to be underrepresented on the DA.

2) The Manhattan program has put forward an alternative proposal:

Each program will have 2 voting delegates, regardless of number of members.
These proposals will be included in discussion and voting at the next DA meeting:
WHEN:      Wednesday, November 6, from 6-7:30 pm
WHERE:    256 W. 38th Street, 12th Floor