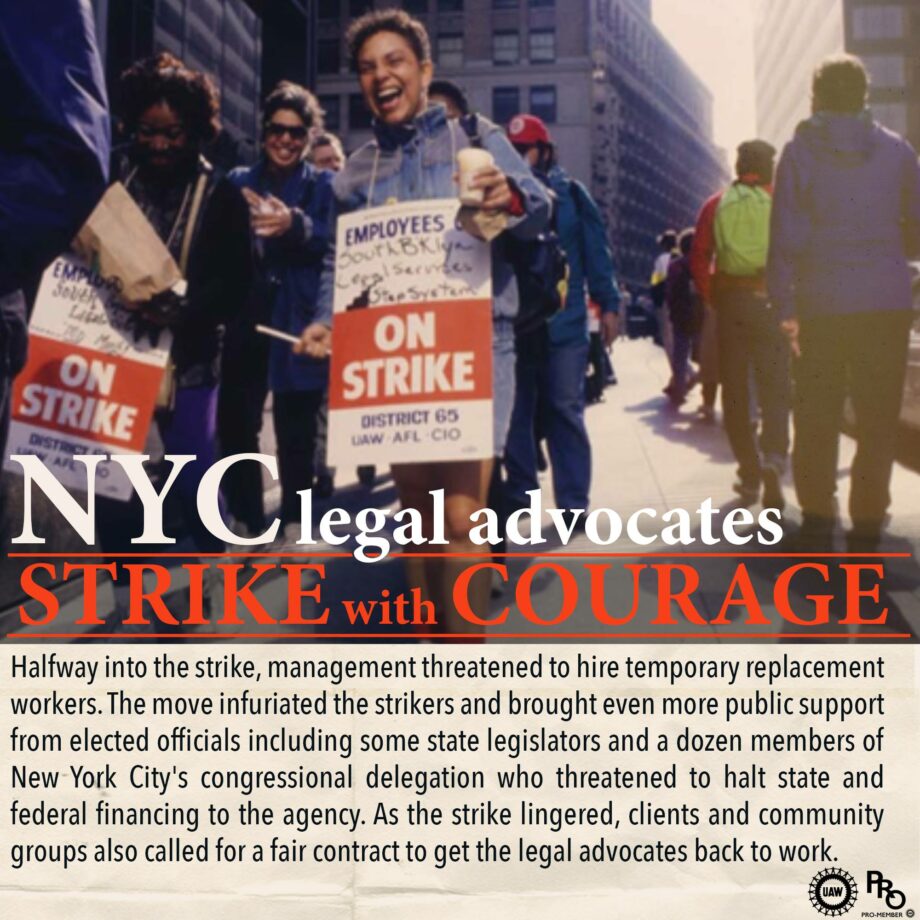 It was 26 years ago this week that our colleagues and predecessors settled a four month strike, winning historic step increases and dramatically improving the pay parity between attorneys and legal workers. Our national union, the United Auto Workers, has posted the below memory of our 1991 strike:

On July 19, 1991, after a vibrant 16-week strike, UAW Local 2320 members approved a new contract which finally gave them the recognition they deserved for the very hard work they do for Legal Services in New York City. #UnionHistory #PROUAW

Working for Legal Services whether as a lawyer, paralegal or clerical staff has always been about dedication to clients. The Legal Services staff of New York City represented some of the toughest, most heartbreaking cases in the civil court system. They represent thousands of low-income clients on matters from housing, domestic violence, public benefits, education, family, community economic development, HIV/AIDS, immigration, LGBTQ issues and mental health. In addition to being staunch client advocates, these workers, then members of the old district 65/UAW, now members of UAW Local 2320, are also known as the Legal Services Staff Association (LSSA), a unit of the National Organization of Legal Services Workers (NOLSW).

In 1991, the main issue at the bargaining table was pay parity. Lawyers for Legal Services earned $27,500 a year. A paralegal started at $20,250, a secretary at $18,150. Top salary for lawyers, even after decades of services, was $56,000. The parties bargained for five months, but no serious offers came from management. The workers even worked without a contract for three months. Facing no other recourse, on April 1, 1991, 400 District 65 members walked off their jobs.

Halfway into the strike, management threatened to hire temporary replacement workers. The move infuriated the strikers and brought even more public support from elected officials including some state legislators and a dozen members of New York City’s congressional delegation who threatened to halt state and federal financing to the agency. As the strike lingered, clients and community groups also called for a fair contract to get the legal advocates back to work.
Members and supporters created a hardship fund and the community contributed to fundraisers to help the strikers get by. A strike kitchen and free day care eased some of the struggle for strikers as they took to the picket line each day to defend their rights and improve client services.

When the strike ended July 19, the UAW members gained unprecedented wage increases and eliminated discretionary raises. They also won a strong policy against sexual harassment, got retroactive pension contributions for longtime members, and much more.

The workers would go on to face other strikes in 1993, 2003 and 2013. But the summer of 1991 showed the power of what happens when workers, community and elected officials stand together to fight for fairness for those who spend their working lives fighting for others.