LSNYC’s decision to terminate our healthcare without notice has disrupted necessary health care services for our members and their families, and has directly resulted in missed prescriptions and more than one emergency room visit over the past week. LSNYC’s claims are untrue that they were required to cut off our health care and that our current coverage is monopolistic. 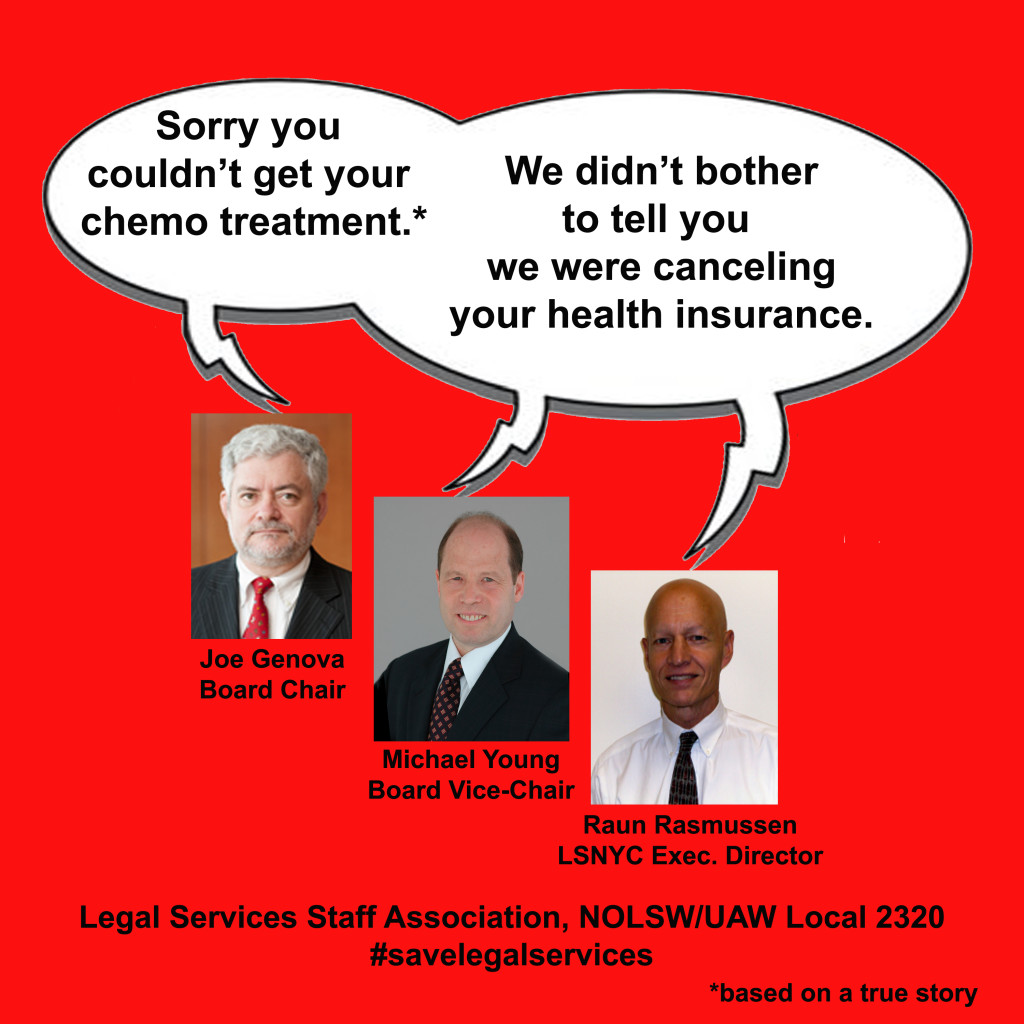 Management’s First Claim: Cutting off the striking workers’ health care was not management’s call, but was a requirement of the insurance companies.

The Real Story: LSNYC had a choice. LSNYC has provided nothing to show that any of our insurers could not continue to cover workers out on strike. But even if this were the case, LSNYC could have continued health care coverage for strikers at no additional cost by making COBRA payments equal to the monthly premiums, as they have done for people who took buyouts once they were no longer active employees.

The truth is, most employers don’t cut off health care benefits during strikes. LSNYC, an organization that purports to fight for social justice for all, has now joined the ranks of such notorious union-busting employers as Coca Cola. And we have been able to find no examples of employers who cut off strikers’ health insurance retroactively and without advance notice to the workers.

LSNYC did not have Travers O’Keefe send out COBRA notices to striking workers until June 5th – several days after coverage had lapsed and almost three weeks after the effective date of termination. This is in stark contrast to their usual practice of giving employees (those on leave, for example) advance notice about their COBRA rights before any lapse in coverage. Even Verizon, which cut off workers’ insurance during their 2011 strike, waited four weeks and gave the workers two weeks’ notice of their intent to do so.

The real and immediate consequences of the lack of notice include a several day interruption of chemotherapy treatments for one member’s husband while the UAW coverage was being activated, and delays in obtaining emergency prescriptions for several members and their dependents with serious medical conditions.

LSNYC cancelled our insurance retroactive to May 15th, which means that the insurance companies will likely seek recoupment from workers who used either health or dental care services after that date.

Finally, in addition to cutting off our insurance, members can no longer access the money that they have paid into their flex spending accounts for any services after May 15th, and fear that we may lose the money that we have already contributed altogether.

Management’s Second Claim: Our current Cigna coverage is no longer offered by any other company, giving Cigna a monopolistic hold over us. We must reduce our plan so that there can be competition from other providers to restrain Cigna, or else they will be able to drive rates up in an uncontrolled manner.

The Real Story: LSNYC’s own insurance broker and consultant, John Van Wie, advised that our insurance rates are driven by our five-year claims history, and that changing carriers is unlikely to save money. Both the Affordable Care Act and the general leveling trend in health care costs contradict LSNYC’s predictions of future price gouging by Cigna. When LSNYC finally solicited outside bids based on our current package, the response from other carriers was not a refusal to bid, but that they would not match the Cigna rate. Most recently, LSNYC obtained a bid from one company based on the proposed stripped down coverage for a price comparable to what Cigna charges for the current superior coverage.

Regarding future premium increases, LSNYC publicized Cigna’s opening request for a 22% premium increase to renew our existing coverage. But now it turns out that Van Wie successfully negotiated a renewal increase for LSNYC of only 9.9% – less than half of the highly-touted 22% increase, even though it is on a month-to-month basis.

Watch our members confront the LSNYC Board: