January 30, 2015, New York, NY – Today the unionized employees of MFY Legal Services, Inc. (MFY) rejected management’s contract proposal and declared a strike. The 56 attorneys, paralegals, secretaries, and other professionals are represented by the Legal Services Staff Association (LSSA). The vote passed with an overwhelming 90% of members in favor, providing a clear mandate.

MFY’s employees demand a contract that ensures that low-income New Yorkers will be served by an experienced, knowledgeable staff. The union is seeking fair pay and manageable workloads for the organization’s lowest-paid employees, family-friendly policies, and other provisions to retain experienced staff and recruit new employees who reflect the diverse communities the organization serves.

“We are fighting for a contract that works for our clients, that works for our lowest paid and most vulnerable members, and that raises the working standards of legal services workers,” said Jota Borgmann, a Senior Staff Attorney in MFY’s Disability and Aging Rights Project. “Management, on the other hand, wants to lead a race to the bottom. By doing so, they refuse to acknowledge that quality work comes from retaining experienced workers and that a social justice organization must ensure justice in its own workplace.”

MFY’s management has rejected key demands, such as fair pay for the organization’s lowest-paid workers and increased salaries and retirement contributions to keep experienced attorneys at the organization. Management’s modest parental leave offer is contingent on staff agreeing to concessions that will undermine affirmative action hiring practices, something the union is unwilling to do.

Management began negotiations by demanding a series of draconian policies, including terminating or limiting health insurance coverage for employees’ same-sex domestic partners and children. Management also demanded that sick day accrual be limited so that MFY would not have to provide for long-term employees who become terminally ill. Now, management will only drop these callous demands if employees agree to drop demands such as fair pay for the lowest-paid staff and increased retirement contributions.

“Millionaire Wall Street lawyers on MFY’s board want to turn the organization into a short-term training ground for legal careers elsewhere, rather than a premier non-profit firm where staff harness years of experience to provide high-quality services to our clients,” said Daniela Robles, a paralegal in the Government Benefits Project. “They apparently believe that only wealthy people deserve highly trained, experienced legal professionals and attorneys.  We reject that vision and are fighting for a staff that will offer the knowledge and expertise our clients deserve.” 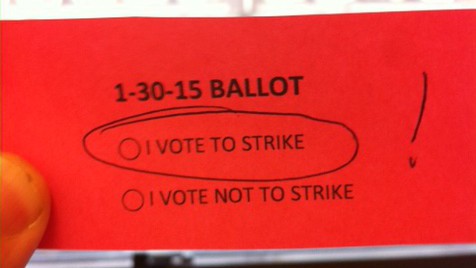 MFY’s staff and caseload have more than doubled in recent years, but its administrative support staff has only grown from three to four people. Management refuses to respond appropriately to the increased workload, either by hiring more staff or compensating its current staff sufficiently to handle the additional work. LSSA is fighting for fair pay for these underpaid and overworked employees,  all of whom are women of color. “I’ve been at MFY for 14 years now,” said Administrative Assistant Jessica Cepin. “My basic costs of living keep going up, but my paycheck hasn’t kept up.”

Members emphasize the importance of a contract that allows them to serve long careers in legal services by welcoming workers with families and ensuring stable futures. “The longer people stay at MFY, the better we get at our jobs.  This means better services for our clients,” said David Ureña, a staff attorney in the Workplace Justice Project. “But management has offered a contract that will force people out of the organization. That can only hurt our clients.”

In October, the LSSA bargaining team and management scheduled weekly or bi-weekly negotiation sessions through January 15 to ensure sufficient time to reach a fair agreement. The union clearly stated it would need the time between January 15 and 30 to consider the final offer and then hold a vote. However, at the final hour, management refused to make significant movement at the bargaining table, instead insisting on further meetings. The LSSA bargaining team offered to stay all night on January 15 to reach a deal, but management refused to engage in further discussion.

“Rather than sitting down and negotiating in good faith, management has engaged in dangerous and unnecessary brinksmanship,” said Joseph Rebella, a staff attorney in the Foreclosure Prevention Project.

The tactics used by management in this negotiation have not only been unnecessarily aggressive, but also illegal. On December 9, a manager was caught listening in on a union meeting.  When confronted, the manager admitted that she had been eavesdropping. Union representatives immediately asked Executive Director Jeanette Zelhof to take action, but she has failed to hold the manager accountable. LSSA is pursuing an unfair labor practice charge at the National Labor Relations Board.

February 2 will be the first day of the strike. LSSA’s bargaining team had committed to sit down with management that morning in hopes of reaching an agreement and avoiding a prolonged strike, but management has informed the union that it will not be available to negotiate that day.