Repeating its missteps from the 2013 strike, LSNYC has again threatened to terminate its employees’ health insurance if we go on strike on January 30th. In response, the following letter was delivered on January 12th to LSNYC management’s bargaining team. 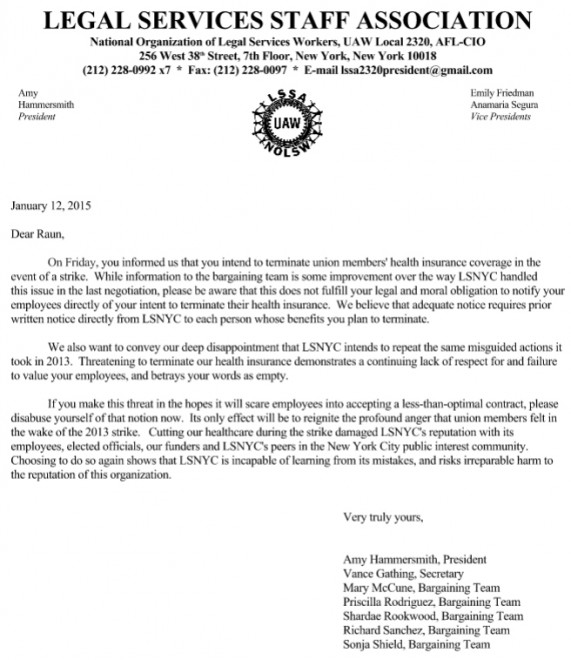 On Friday, you informed us that you intend to terminate terminate union members’ health insurance coverage in the event of a strike.  While information to the bargaining team is some improvement over the way LSNYC handled this issue in the last negotiation, please be aware that this does not fulfill your legal and moral obligation to notify your employees directly of your intent to terminate their health insurance.

We believe that adequate notice requires prior written notice directly from LSNYC to each person whose benefits you plan to terminate.

We also want to convey our deep disappointment that LSNYC intends to repeat the same misguided actions it took in 2013.  Threatening to terminate our health insurance demonstrates a continuing lack of respect for and failure to value your employees and betrays your words as empty.

If you make this threat in the hopes it will scare employees into accepting a less-than-optimal contract, please disabuse yourself of that notion now. Its only effect will be to reignite the profound anger that union members felt in the wake of the 2013 strike.

Cutting our healthcare during the strike damaged LSNYC’s reputation with its employees, elected officials, our funders and LSNYC’s peers in the New York City public interest community. Choosing to do so again shows that LSNYC is incapable of learning from its mistakes, and risks irreparable harm to the reputation of this organization.