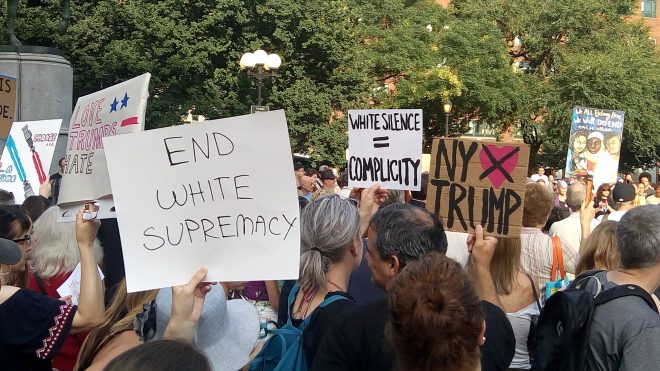 The terrorism that came to the streets of Charlottesville this weekend was sickening and grotesque. The racism and violence slung proudly by white nationalists and Nazis should have no place here.

Yet we know what happened in Charlottesville was not an isolated incident. The racists who stalked and killed black people during slavery, Reconstruction, and Jim Crow, supported by a white supremacist system that permitted and forgave their terrorism, have now taken off their hoods and emerged onto our streets in the light of day, knowing that too many of our top political leaders agree with them in their hearts and will wink and nod at their actions.

We all know we are not playing on a fair field. When people of color lead peaceful rallies, the police do not hesitate to patrol heavily and often violently. Meanwhile, when massively armed white men bearing torches descend on our streets, the police stand back and watch. The police routinely shoot and kill black men and women on the slimmest of pretexts, falling back on their own racist fear as justification, yet in Charlottesville, as in Charleston and so many other places, the police managed to arrest a murderous white man and take him into custody without harming him.

We also know that inequality and white supremacy are baked into our laws, structures, and institutions. Many of the low-income clients of color that our union members represent live in neighborhoods they were red-lined into, and after generations of government disinvestment in those neighborhoods, our clients are now fighting to keep their homes and preserve their families and communities despite predatory equity and speculators trying to force them out. Many of our union members have dedicated their careers to fighting the effects of systemic racism such as this.

The Legal Services Staff Association urges all members and allies to stand with those who fought white supremacists in Charlottesville this weekend, those fighting them in Boston this Saturday, and all those who are fighting every day to end the system of white supremacy that kills black people’s bodies and all of our souls. The target aimed most squarely at black people will not hesitate to hit us all.

And in particular we urge white people to support our friends, colleagues, and clients of color, and to hold ourselves accountable for helping to change this system that benefits white people as a group. Those of us who are white didn’t ask for the privileges of whiteness, but we receive those privileges anyway, and we are responsible for working to eradicate white supremacy. Those of us who are white need to step up.

In addition to the demonstration tonight at Trump Tower at 5:30pm, you can also click here to find other events occurring over the next few weeks. In particular, mark your calendars for a National Day of Action against white supremacy on Saturday, August 19th.

We also invite you to join a national call tonight, Monday, August 14th at 9pm, sponsored by the Movement for Black Lives and Beyond the Moment/The Majority to learn more about the national day of action on Aug. 19th to defend our communities & confront hate and white supremacy in all its forms. Please register for the call using this registration link.